In March 2011 Letschert was appointed professor to the new chair of victimology and international law at Tilburg University. From April 2010 to August 2010 she was a Visiting Research Fellow at the Lauterpacht Centre for International Law at the University of Cambridge (UK), and Research Fellow of Clare Hall, Cambridge, where she was offered a lifelong membership. In 2014 she was Visiting Professor at the University of Barcelona. Letschert has authored and edited several book publications and articles in national and international journals.

In May 2015 she was awarded a Vidi grant by the Netherlands Organisation for Scientific Research on the impact of international tribunals on societies and individuals that have been confronted with serious human rights violations and international crimes. She is expert consultant for the Special Tribunal for Lebanon on victim issues. Apart from her position as professor she served as director of the International Victimology Institute Tilburg (INTERVICT). In 2012, Letschert joined De Jonge Akademie (Young Academy) of the Royal Netherlands Academy of Arts and Sciences of which she became chairperson in April 2015. 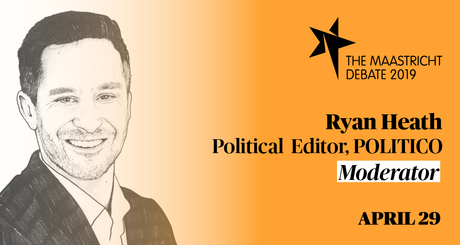 Ryan is political editor at POLITICO Europe, with particular responsibility for shaping POLITICO’s 2019 European elections coverage. Ryan served for three years as the original author of our Brussels Playbook column.

He began writing for national newspapers in his native Australia in 1999, and is the author of two books including the cult classic “Please Just F* Off, It’s Our Turn Now,” an account of how the Baby Boomers / 68er generation are viewed by the Millenial generation. After working as a speechwriter for the British civil service, he joined the European Commission working for President Jose Manuel Barroso and Vice President Neelie Kroes as a spokesperson. Ryan is regular policy commentator on outlets such as BBC, CNN, MSNBC, and Deutsche Welle. He has reported from major events such as the World Economic Forum in Davos, G7 summits and US political conventions.

The livestream is available here.

Leading up to the debate, we are carrying out a survey with the aim to get a sense of the issues students and young people view as being particularly pressing. The results of the survey will influence the formulation of some of the questions the Spitzenkandidaten will be asked during the debate. The survey is available at the following website and can be widely circulated:

Themes of the Debate

The Future of Europe

Click here for more detailed information about the themes.